Nothing to display.
Tweets by NEED_estate

Renfe is the Spanish national rail operator, offering a range of options to get you across the country by train. Whether you're planning a hike the Pyrenees, a weekend in Barcelona or a trip to the seaside, Spain's railway network is quick, efficient and generally reliable way to get you where you need to be.

Here is a rundown of what you need to know to make the most of rail travel in Spain. 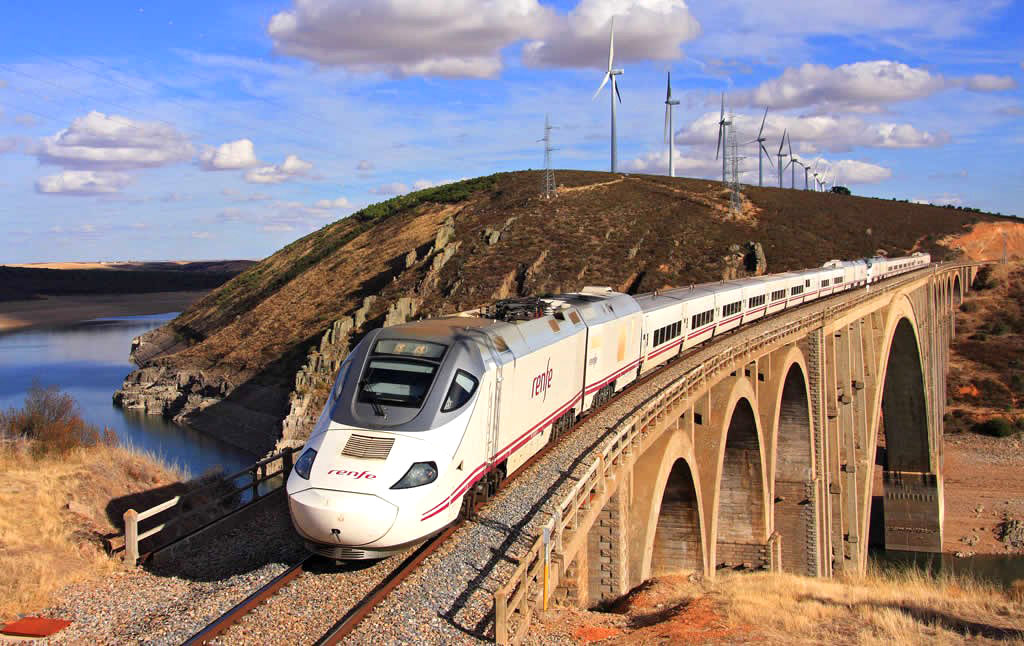 There is currently over 2500km of high-speed railway track in Spain. One of the first routes, and most popular, runs between Madrid and Seville, a trip of around two and a half hours which can cost as little as €20.

It stops at Ciudad Real, Puertollano and Córdoba Central, covering 471 kilometers. High speed trains on this route are quite frequent, with 17 from Madrid to Seville each day, leaving approximately every hour. 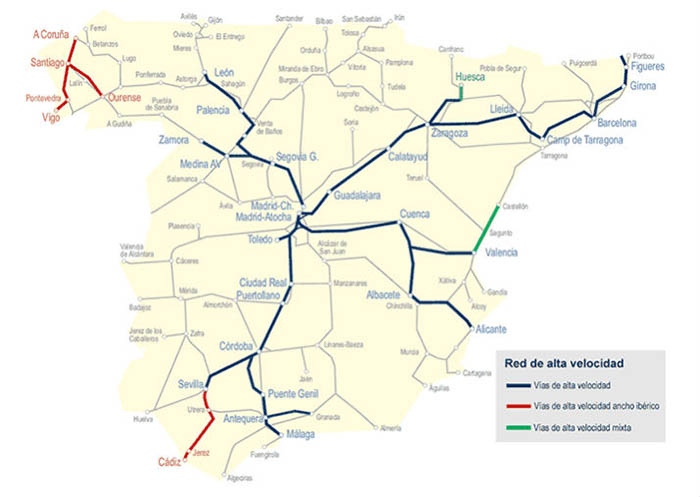 It takes just over 5 hours to travel from Barcelona to Seville, with stops at Tarragona, Lleida, Zaragoza, Ciudad Real, Puertollano and Córdoba.

The train from Madrid to Barcelona takes three hours, with prices starting at 30 euros and there is a line between Barcelona and Malaga that takes just five and a half hours. 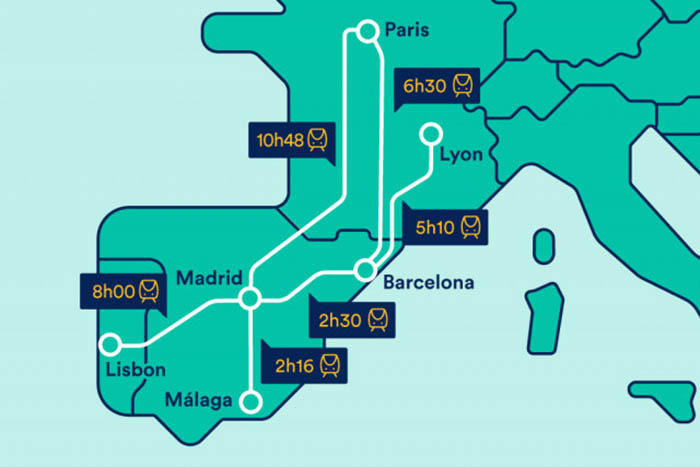 International routes to and from Spain

International travel in and out of Spain is possible by rail. There is a direct train that connects Barcelona and Paris in six hours twenty-five minutes, with prices starting from around €30, and a train from Vigo to Porto that takes three and a half hours. 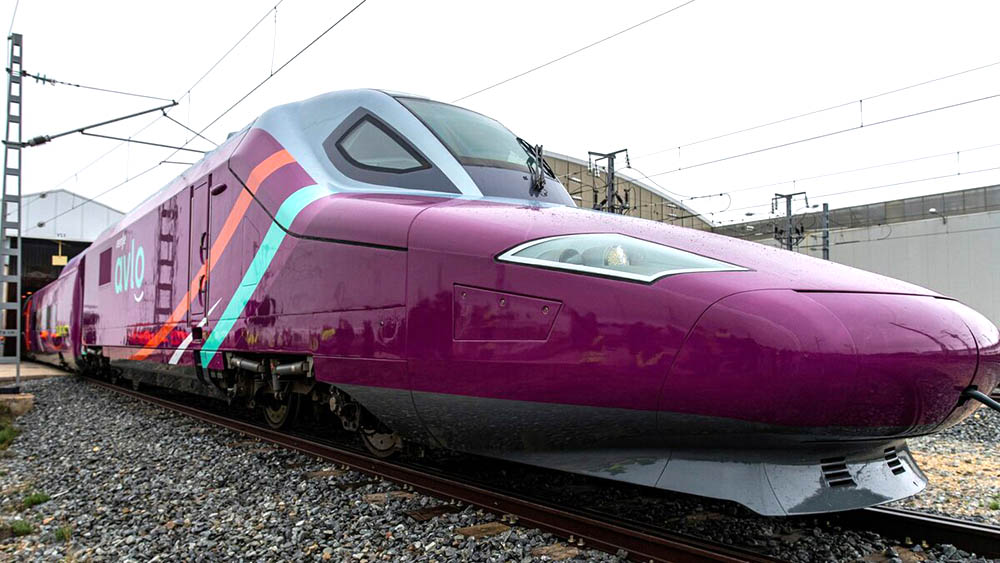 On April 6th at the start of Semana Semana (Easter Week) Spain’s new low-cost, high-speed trains between Madrid and Barcelona will start operating.

The new bright purple trains have been given the name Avlo – presumably to reflect that they are a low cost version of the more upmarket Ave trains.

The budget price will vary between €10 and €60 for the 621km (386 miles) journey between Madrid and Barcelona, at least 25 percent cheaper than the current service.

The route operate will operate not from Barcelona-Sants station in the centre of the Catalan capital but from a new hub in El Prat de Llobregat, a satellite town near the airport, with five trains going in each direction every day.

After years of anticipation, the high-speed route connecting Madrid and Granada opened in June, 2019, cutting the previously five hour journey down to just over three hours.

Not all high-speed routes have been successful in Spain, though, with European Court Auditors complaining in 2018 that the €23.7 billion that was dedicated to the country's network from 2000 was money that had ‘not been spent wisely’. As a result, projects such as a high-speed track between Madrid and Lisbon, are still up in the air.

Railway tracks can get political, too, with one MP from a regional party in Cantabria saying that his support for Pedro Sánchez’s new government would depend partly on €1 billion being spent on a high-speed train network from Madrid to Santander.

Several special routes are in operation in Spain, taking rail travel to the luxury level and really making it about the journey rather than the destination. 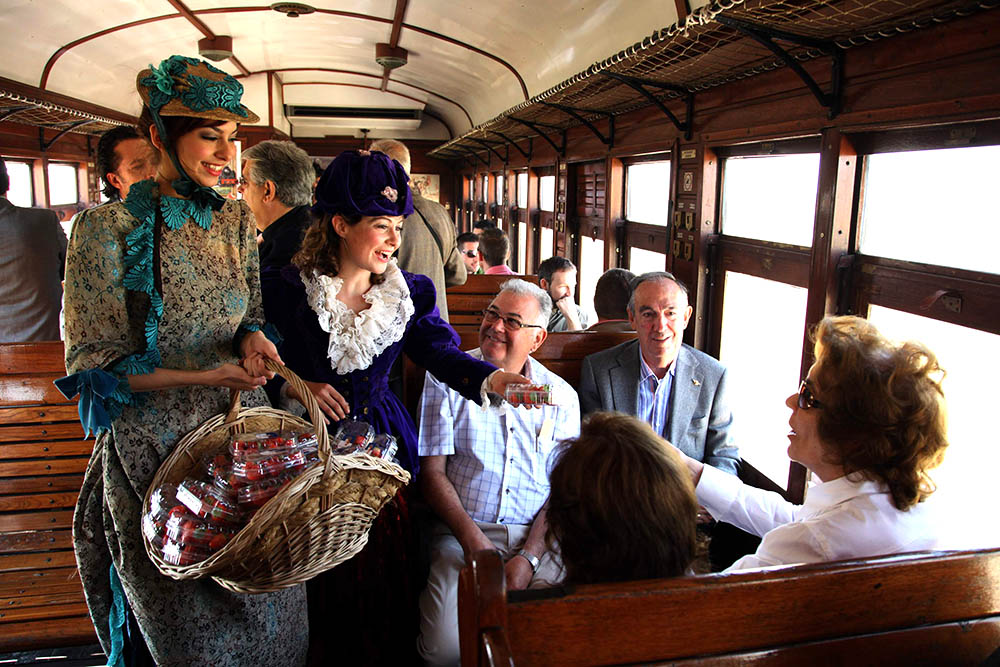 The Strawberry Train takes you back in time for the day

The Strawberry Train is perfect for a day trip from Madrid. Hop onto the historic train and be taken back to 1851, when the line opened. An hour’s ride will take you to Aranjuez and the train runs regularly between the end of April and June, strawberry season! 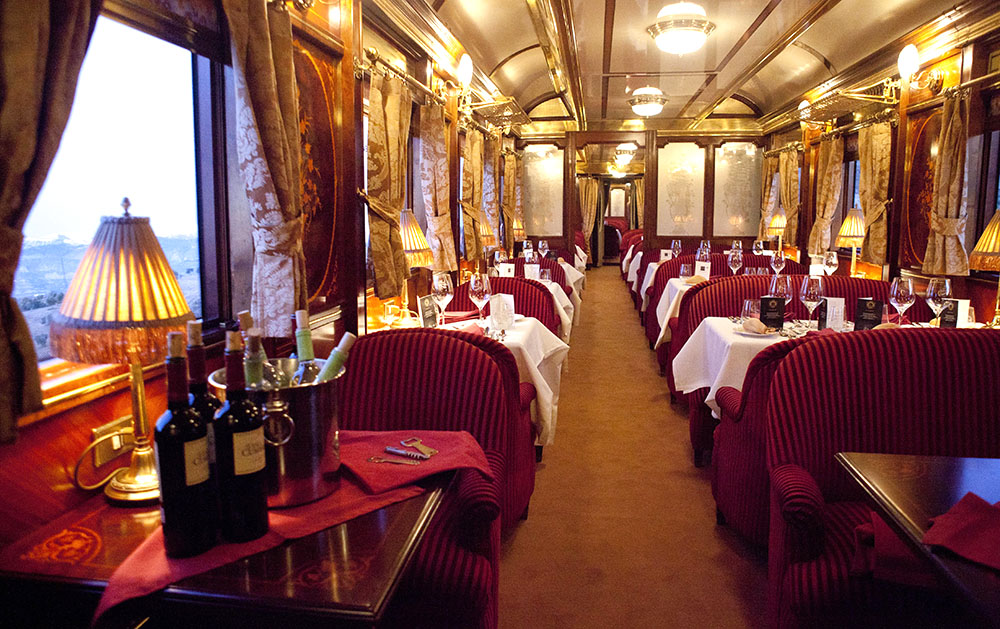 A luxury way to travel by train: the Al Andalus train

Renfe has a luxury palace on wheels which was built in France for use by members of the British monarchy: the Al Andalus train. Several special routes are offered around Spain, including exploring Andalusia, a route from Madrid to Seville through Extremadura and a trip along the northern coast from San Sebastian to Santiago de Compostela.

When to book
All long-distance trains require pre-booking, and doing so can get you some great discounts on fares. Booking should open 90 days before the journey for AVE trains, and 60 days before for other trains, although Renfe does not always stick to these rules, and the booking horizon can sometimes be as little as 30 days.

Classes
There are two classes on most Renfe trains: ‘Turista’ (second class) and ‘Preferente’ (first class), but some AVE trains offer ‘Turista Plus’ which is a premium second-class, with first class style seats, but no meal-service or access to the Sala Club lounges.

'Preferente' gets you a three-course meal and wine plus the option of an aperitif and copa.

Whatever ticket you buy, you will have a designated seat within a designated coach. When booking the seat online you have the option of choosing which way you want to face. 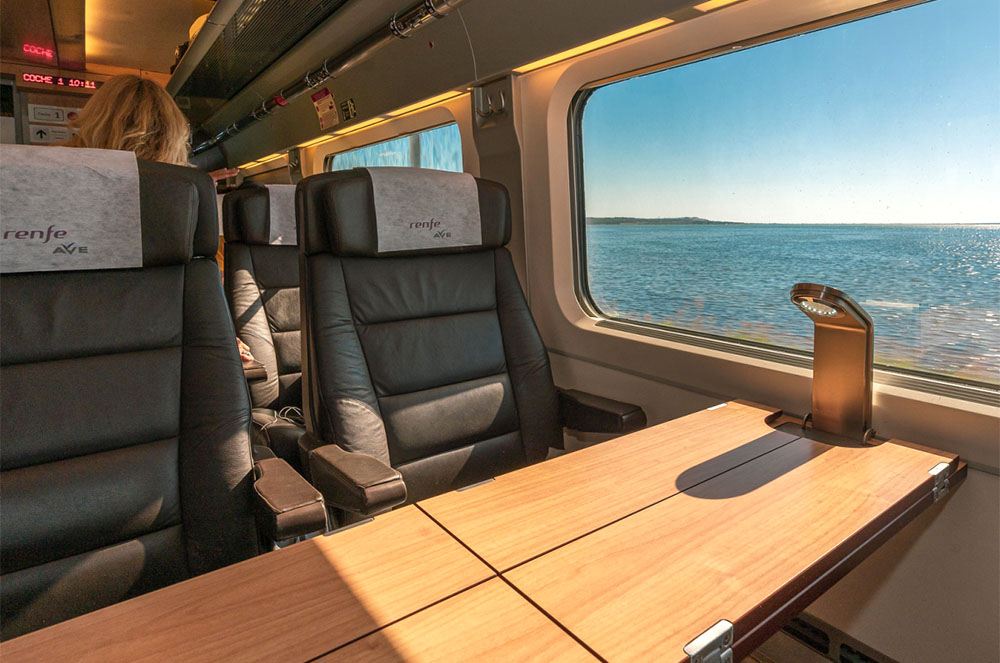 Added extras
AVE trains are currently being fitted with Wifi and on most long-distance trains, you will be able to find a catering carriage offering drinks, bocadillos, snacks and sandwiches, but, of course, you can take your own food and drink on board too.

You'll often have the option of watching a movie on the screens placed intermittently through the carriage, with free disposal headphones distributed by crew.

Prices
The full-price, refundable and changeable fare is called a ‘Flexible’ ticket and can be bought on the day of travel, assuming seats are available. Promo and Promo+ are advance-purchase tickets which are cheapest when booked early. Promo+ tickets allow access to the Sala Club lounges. 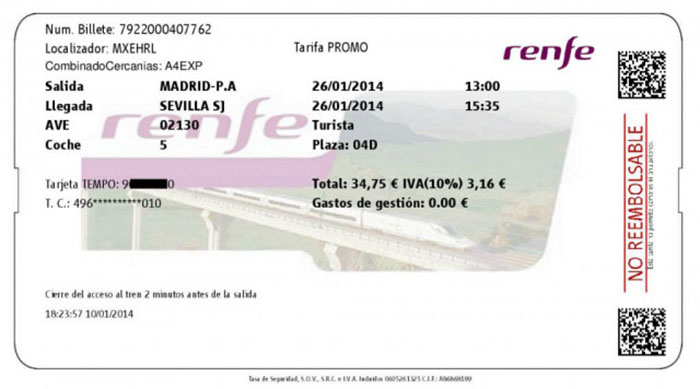 Off-peak tickets purchased online offer a discount of between 50 and 70 percent. These tickets usually need to be booked at least 15 days before the date of travel, although this time period is sometimes shortened for special promotions. Check out Renfe's social medias for flash sales where you can find great discounts.

It is certainly worth purchasing a return ticket if you plan on coming back within 60 days, as you will find it significantly cheaper than having to pay for two tickets.

Group tickets
A ‘tarifa mesa’ is designed for groups of four people, allowing a discount of up to 60 percent off the price of individual tickets if you would like to reserve a table of four.

Renfe Spain Pass
For those tourists visiting Spain, consider buying a RENFE Spain Pass which allows you multiple AVE trips around Spain within a month. From €195 for four trips to €410 for ten trips, it also offers discounts on museums entrances in the cities you plan to visit.

Children, youths and over 60s
If you are aged 60 or over, you can purchase a ‘Tarjeta Dorada’ (Gold Card) at Renfe stations. Between Monday and Thursday, this allows a discount of 40 percent if you book in advance, and 25 percent on the day of travel.

Youth railcards, including the international GO 25 card, offer 25 percent off. Students and people aged up to 26 years are entitled to 20 to 25 percent off most ticket prices.

Children under four travel for free if they do not occupy their own seat and children up to 13 travel with 40 percent off.

Delays
Renfe is pretty good with punctuality, probably because it offers great compensation for delayed arrivals on all high-speed and long-distance trains. AVE trains refund 50 percent if the train is over 15 minutes late, and 100 percent if it’s over 30 minutes late. You can collect your refund at the train station, or trade in your credit to receive a 20 percent bonus on the purchase of future tickets.

This means that trains pretty much always leave on time so make sure to leave plenty of time to get on board and find your seats. Renfe warn that you must be on board two minutes before the scheduled departure time.