Nothing to display.
Tweets by NEED_estate

Alejandro Valero has already attracted 19,000 workers with BuscoExtra as the US tech giant lags behind in the testing stage with its Uber Work app.

A Spanish entrepreneur has outpaced Uber Works with the launch of the casual work platform BuscoExtra. As Uber trials its program in the United States, 29-year-old Alejandro Valero from Granada has jumped ahead and launched the application where waiters and delivery people can find work by the hour. In the six months since its final version was completed, BuscoExtra has attracted 19,000 workers and 1,300 businesses. Its story of success has been shared by Google on its international blog and captured the attention of the Financial Times.

“I was more lost than a priest at a nightclub,” jokes Alejandro Valero when he remembers how he began in Granada, a city he returned to after his father died. “But I have always been enterprising and I didn’t stop hearing about how many people were unemployed. I saw that recruiters don’t serve today’s market, which could need people on national holidays or at times when they are not working. I also realized that job pages were just a list of rewritten ads or part-time employment agencies that weren’t very fast,”

That was when he focused on a sector with particular needs. “There are 177,000 bars in Spain, more than the United States. And the needs for staff vary a lot,” says Valero. He took his idea “in a PDF” to the Cruzcampo Foundation and joined the program Google Activate. Here the designer, who trained in law, was taught the digital skills he needed to turn his idea into a reality. Recognition from Málaga University and telecoms giant Vodafone gave him the final push.

It took Valero a year and a half to create the application Uber is still working on, and only six months to finish off the final version. In just one year, he has made revenues of €1 million – a level of growth that has attracted attention from big business but which Valero is cautious about. 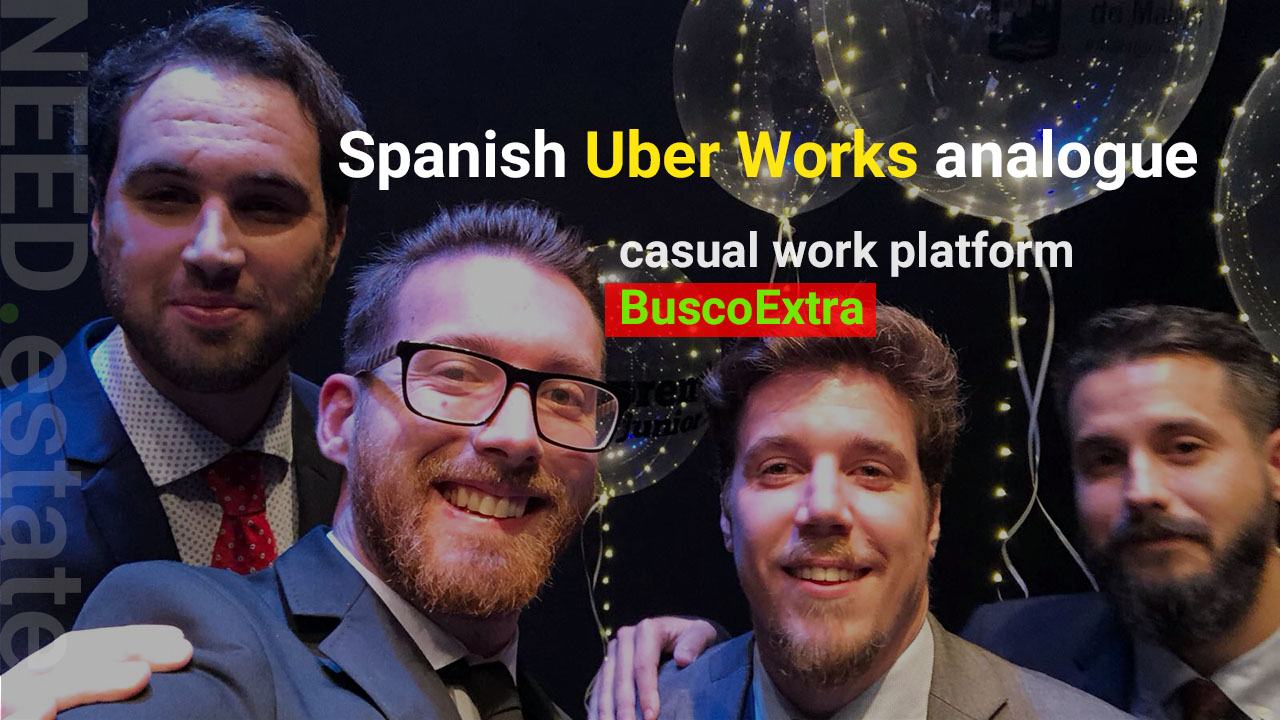 BuscoExtra is a digital marketplace that brings together bars and restaurants and people looking for work. It’s free to join, and to register job-seekers just need to provide the documents they need to be legally hired as well as being signed up to Spain’s Social Security system. Businesses also need to provide specific documentation to be involved. The platform allows businesses to connect with job-seekers within a 30-minute walking radius, it pre-approves the worker, sends out a digital contract and within half an hour a person can be working.

An employment agency provides the necessary support to make sure the worker is paid, the business is invoiced and the whole process is “legal” (one of Valero’s obsessions).

“The hourly rate may by higher than if they contracted the worker themselves but it gets rid of a fixed cost that becomes a variable. The saving for the business is compensated with growth,”

explains Valero. Like other collaborative economy firms such as Airbnb and Uber, BuscoExtra provides a rating system where workers and businesses can score the experience.

“The system allows higher pay and promotes loyalty among users who want mobility. We work with big companies like Burger King and small ones like Bar Pepe,” says the 29-year-old.

Valero, who now has a team of 11 people working for BuscoEmpleo, dismisses misgivings from labor unions that these types of platforms increase the risk of precarious work.

“We are making the sector more professional, we avoid illegal employment, the worker charges even if they work for one hour and we reject any business that does not meet the legal requirements,”

Given the success of the application, Valero is now considering extending the model to other sectors, such as the hotel or trade industry. He is also going to set up his own employment agency so that he can reduce costs, pay workers immediately through Bizum (an instant payment app) and try to improve conditions for all involved. “The temporary work market is huge and there is a gap. We offer a fast and legal alternative for this,” says Valero. His goal is to help provide unemployed people with a million hours of work.